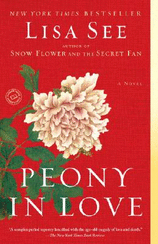 Weaving together a rich tapestry of fiction and historical fact, Lisa See transports her readers to the far reaches of Chinese History through her vivid storytelling. In Peony In Love, See archives the experiences of Chinese women in the seventeenth century whose lives are predetermined by arranged marriages and sequestered lifestyles. Through her fictional character Peony, See illustrates the social insignificance assigned to these women who were meant to leave their family homes to become only lowly servants in their mother-in-laws households.

In a desperate attempt to control their own destinies the women of Peony In Love seek out self starvation to avoid the mysterious and unchosen fate of their wedding days. These events also pervaded ancient Chinese culture during this century, demonstrating See’s convincing melding of her characters with historical precedence. The Peony Pavilion, a controversial opera of the time, serves as an important point of reference throughout See’s fictional tale. It is a heavily censored story of a woman who dared to choose her own future by starving herself to death before her wedding night in hopes to be resurrected later by her true love.

The ominous expectations of marriage are demonstrated in marital advice given to Peony. ‘” A woman’s greatest strength is to give birth to sons, “Fourth Aunt instructed. “It gives a woman power and it can take it away. If you give your husband a son, you might keep him from entering the pleasure quarters on the lake or bringing in concubines. Remember, a woman’s purity grows through seclusion…” I listened hard to what she said, but she told me nothing about what to expect on my wedding night or how I could participate in clouds and rain with someone I didn’t love, like, or know… These thoughts which had once filled me with happy expectation, now made me want to run away. That I had no way to escape my fate made me feel even worse.”