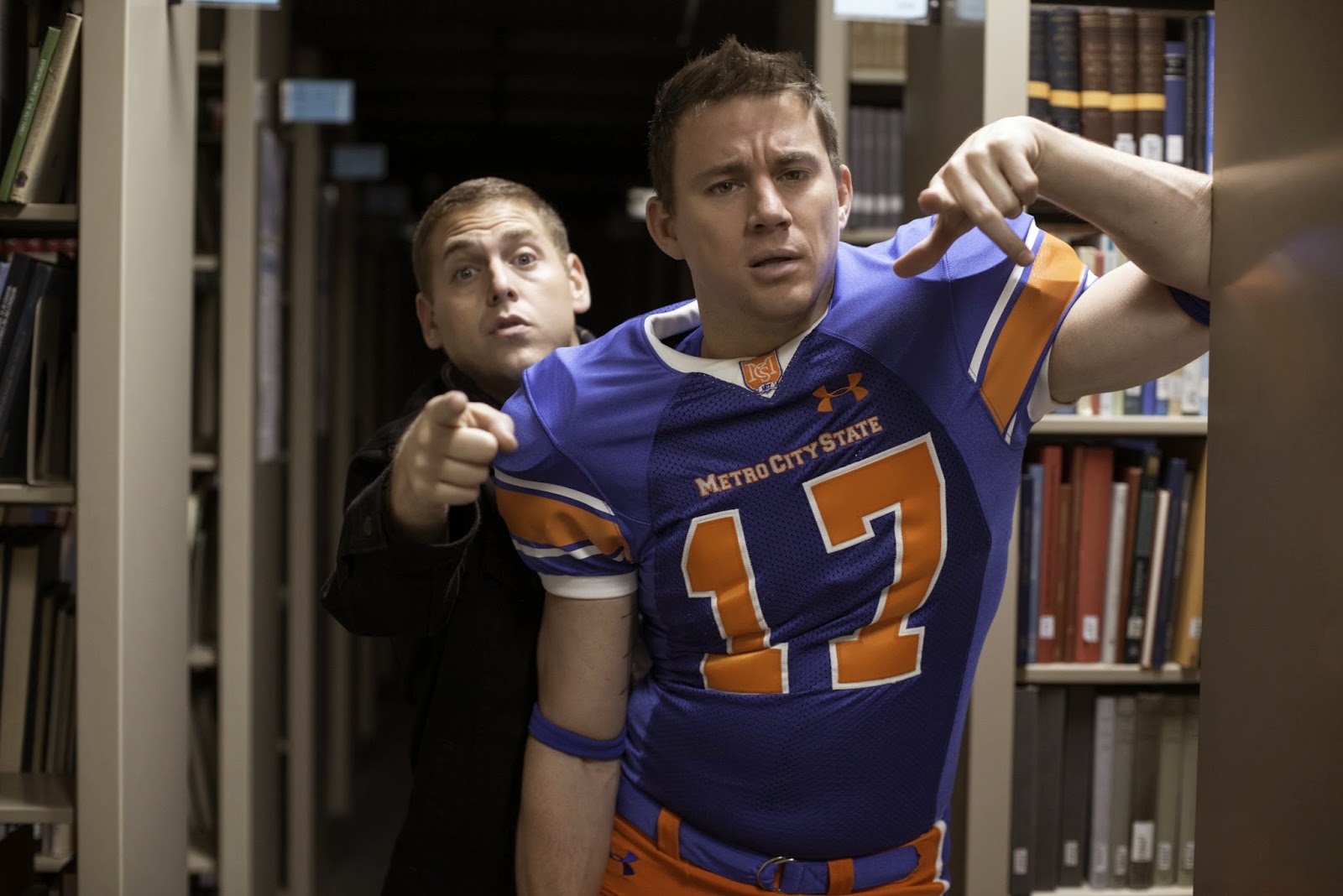 “Hey you – yeah you: You better have watched all of The Wolf of Wall Street and Magic Mike before you tell me anything!” Schmidt (Jonah Hill) and Jenko (Channing Tatum) make an emphatic point – both literally and figuratively – in a scene from from co-directors Phil Lord & Christopher Miller’s follow-up to their 2012 hit, 2014’s 22 JUMP STREET. Credit: Michael Gibson © 2013 Universal Pictures. All Rights Reserved.

KEY CAST MEMBERS: Jonah Hill, Channing Tatum, Ice Cube, Amber Stevens, Jillian Bell, The Lucas Brothers, Jimmy Tatro, Wyatt Russell, Peter Stormare and Nick Offerman
WRITER(S): Michael Bacall and Oren Uziel (screenplay); Michael Bacall and Jonah Hill (story) and Patrick Hasburgh and Stephen J. Cannell (creators of the original TV series on which the film is based)
DIRECTOR(S): Phil Lord & Christopher Miller
WEB SITE: http://jumpstmovies.tumblr.com/
60 SECOND PLOT SYNOPSIS (OR AS CLOSE TO IT AS ONE CAN TRY TO MAKE): The sequel to the 2012’s hit comedy that brought a comedic twist to the original TV series, 22 Jump Street stars Jonah Hill & Channing Tatum as Schmidt and Jenko, a.k.a. undercover cops who posed as brothers to infiltrate a local high school and bust up a drug ring run by Eric (Dave Franco) and Coach Walters (Rob Riggle). Successfully, completing the assignment, Schmidt and Jenko – a.k.a. the Doug and Brad, the McQuaid brothers – find themselves tracking down a criminal known only as the “Ghost” (Peter Stomare).

Unfortunately for Schmidt and Jenko, the case ends with them getting re-assigned by Deputy Chief Hardy (Nick Offerman) to their old stomping grounds at Jump Street – which has moved across the street – under the direction of their old boss, the still hard-nosed Captain Dickson (Ice Cube). And along with informing them about Jump Street’s new address, Dickson informs our would-be heroic duo about their new assignment: Going to MetroCity College to pose as students stop the spread of a new drug nicknamed “WhyPhy.”

After meeting their new hallmates the Yang Twins (the Lucas Brothers) and Mercedes (Jillian Bell), the roommate of the deceased student that kicked their case off, Schmidt and Jenko quickly realize they are going in different directions. While Schmidt is hitting it off with Mercedes’ new roommate Maya (Amber Stevens) and the rest of the art crowd, Jenko is having the time of his life hanging out with the football team and newfound buddies Rooster (Jimmy Tatro) and Zook (Wyatt Russell).

But the unique tattoo on Zook’s arm – a bazooka, hence the nickname – might just be the lead Schmidt and Jenko need to crack the case … They just have to hope they don’t blow their cover first before they can investigate and find out.

WHO WILL LIKE THIS FILM THE MOST?: Anyone who thought the first 21 Jump Street was funny, Channing Tatum fans, Ice Cube fans, people not yet hip to the Lucas Brothers and/or Jillian Bell fans
WHO WON’T LIKE THIS FILM?: Pretty much anyone who didn’t like 21 Jump Street or doesn’t like movies with a substantial amount of profanity
BOTTOM LINE – IS IT GOOD, GREAT, BAD OR DOWNRIGHT AWFUL? There’s no reason to drag this out with a lot of hyperbole, metaphors and analogies and/or diatribes. All you need to know about 22 Jump Street is that the film does the rare thing that most comedy sequels don’t do: Be better than the original.

And in doing so, it lays claim to the reigning title as the funniest movie of 2014 thus far.

WHAT’S GOOD (OR BAD) ABOUT IT?: As the Hangover trilogy proved and Muppets Most Wanted acknowledged earlier this year, sequels (especially comedic ones) are hard to pull off. 22 Jump Street, however, embraces the idea that audiences want the same thing and delivers it; the key difference with 22 Jump Street being that the film is filled with smart, self-effacing humor while keeping its story (somewhat) coherent and grows its characters in a manner that enhances the aforementioned other two aspects.

This is evident in the chemistry between Hill and Tatum, who have a great, dynamic interplay that showcases modern comedic timing to a “t.” Be it the delivery of an obvious joke or a more subtle one about their relationship, Hill and Tatum make the most of every scene hitting you with silly jokes, smart jokes, physical humor and the like throughout the film. Whether they are making the joke or are the butt of it, they are fully committed which in turn makes watching 22 Jump Street a fantastically fulfilling experience.

Hill and Tatum are not alone, however, in their comedic prowess as 22 Jump Street is also the rare film that gives nearly every member of the cast a chance to shine, leading to Cube, the Lucas Brothers and Jillian Bell nearly stealing the movie right from under them. Whereas the Lucas brothers showcase the big laughs that can come from being mellow, Bell (a former writer for Saturday Night Live) and her rapid fire joke delivery is brash, assertive and all-out relentlessly funny. (Think Melissa McCarthy in Bridesmaids except even more uncensored.) And in once again embracing the stereotypical character of the angry black man, Cube delivers his best performance since 2012’s original Jump Street while – whether he did it intentionally or doesn’t even realize it – parodying his character in his early hit this year, Ride Along.

Making fun of everything from sequels to the college experience, 22 Jump Street never loses its sense of humor – both about everything it makes fun of (save for some unfortunately timed Tracy Morgan and Maya Angelou jokes) on screen and of itself. And that’s what not only makes 22 Jump Street the funniest movie you might see all year, but ironically one of the more original offerings to hit theaters this year.