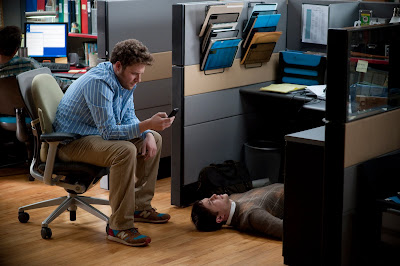 THE PLOT: Inspired in part by writer Will Reiser’s real-life ordeal, 50/50 stars Joseph Gordon-Levitt as Adam Lerner, a 27 year-old resident of Washington state. Working at National Public Radio with his best friend Kyle (Seth Rogen) when not hanging out with his girlfriend Rachael (Bryce Dallas Howard), Adam has a pretty decent life … And then he goes to the doctor (Andrew Airlie) to figure out why his back has been hurting.

It’s hurting, unfortunately, because Adam has come down with a rare – and possibly fatal – form of cancer.

His world as he completely knows it shattered, Adam tries to make the best of his situation, as do his unprepared friends. Whereas Kyle wants him to try and use his condition to pick up girls, Rachael tries her best to take a break from her active social life to help him in his journeys to and from chemotherapy. At least they’re not as bad as his overbearing mother Diane (Anjelica Huston) who wants to smother him with her love … At least the friends he makes in chemo, Alan (Phillip Baker Hall) and Mitch (Matt Frewer), are cool. And while Adam is scared of what lies ahead in his potentially short future, he may have found a kindred spirit in Katherine (Anna Kendrick), the inexperienced therapist assigned to help him in his darkest hour.

At least, as the movie’s title states, it’s got a dead-even – no pun intended – shot at beating the odds.

THE TAKE: To explain how really well done 50/50 – a film which easily could have gone off the rails – is, put yourself in the shoes of Reise, director Jonathan Levine and Gordon-Levitt. In Reiser’s case, you have a story inspired by a personal struggle that fortunately in his case turned out well. You want to interject some humor into the story (and you have a good partner to help you do that in friend Seth Rogen), but you want to make sure you convey all facets of the story to avoid creating some that does not feel organic, genuine and – at the very worst – cartoonish. For this story is one of a journey of self-discovery, fear, courage and insecurity at all at the same time…

Next, picture being Levine. A well crafted script, let alone one of this nature, comes across your table and you now face the task of taking these words and bringing them to life on the big screen. Under your watch, you will have the ability to create what could be a humorous and touching story … Or a 2 hour, overproduced, disjointed mess that insults those with cancer while alienating audiences. Last but certainly not least, now step into Gordon-Levitt’s shoes. You have to figure out a way to make your character, Adam Lerner, be someone people can identify with, appreciate his situation and ultimately want to root for. You have to be able to make us understand that you are shocked, frustrated, struggling to stay positive while being realistic about your situation so that ultimately, as you face your darkest hour, your journey makes perfect sense from start to finish.

Doesn’t sound easy does it? That’s why 50/50 is so remarkable in the fact the trio achieved a film that does all of the above in an excellently entertaining fashion.

In addition to Gordon-Levitt’s wonderfully subtle performance, 50/50 benefits from the chemistry he shares with Kendrick, both in terms of their therapist-patient relationship and as actors who play well off one another. While Rogen is still, well, Rogen (not that that’s a bad thing in the movie; in fact, it’s far from it), the interplay between Kendrick and Gordon-Levitt feels so natural that after a while they seem like two real friends going through this battle together. Likewise, the rest of the supporting cast is great at balancing the film’s tone between its light-hearted and more serious moments. (This is one of the few times in recent memory the word "dramedy" accurately describes the mood of the film.)

That’s right – 50/50 is funny, hilarious even, in certain moments. Keeping with the old maxim of laughing to keep from crying, Reiser, Levine and company do a great job delivering laughs in unexpected situations without relying on the most bare bones, basic premises to get there. Sure, there is some humor that arrives from some questionable subject matter (it’s in the trailer if you are unfamiliar to what I am referring), but it’s thankfully never done in a gratuitous manner.

Sadly, a film like 50/50 should not be so unique in the fact that it does exactly what it sets out to do: Make you laugh, possibly make you cry and be enthralled by watching a young man who, at what should be the prime of his life, deal with an emotionally draining situation. But in a world proliferated by bad romantic comedies, movies that go overboard and turn into sappy, overly emotional messes and movies where the attention to the critical details is lacking, 50/50 stands out. Whether you have cancer yourself, know someone that has cancer and/or have been fortunate enough to be relatively healthy, the film will touch you – and that’s as great a testament to the film as I can make.

PARTING SHOT: A film that should inspire as many as it entertains, C50/50 beats the odds to deliver one of the year’s most poignant films.