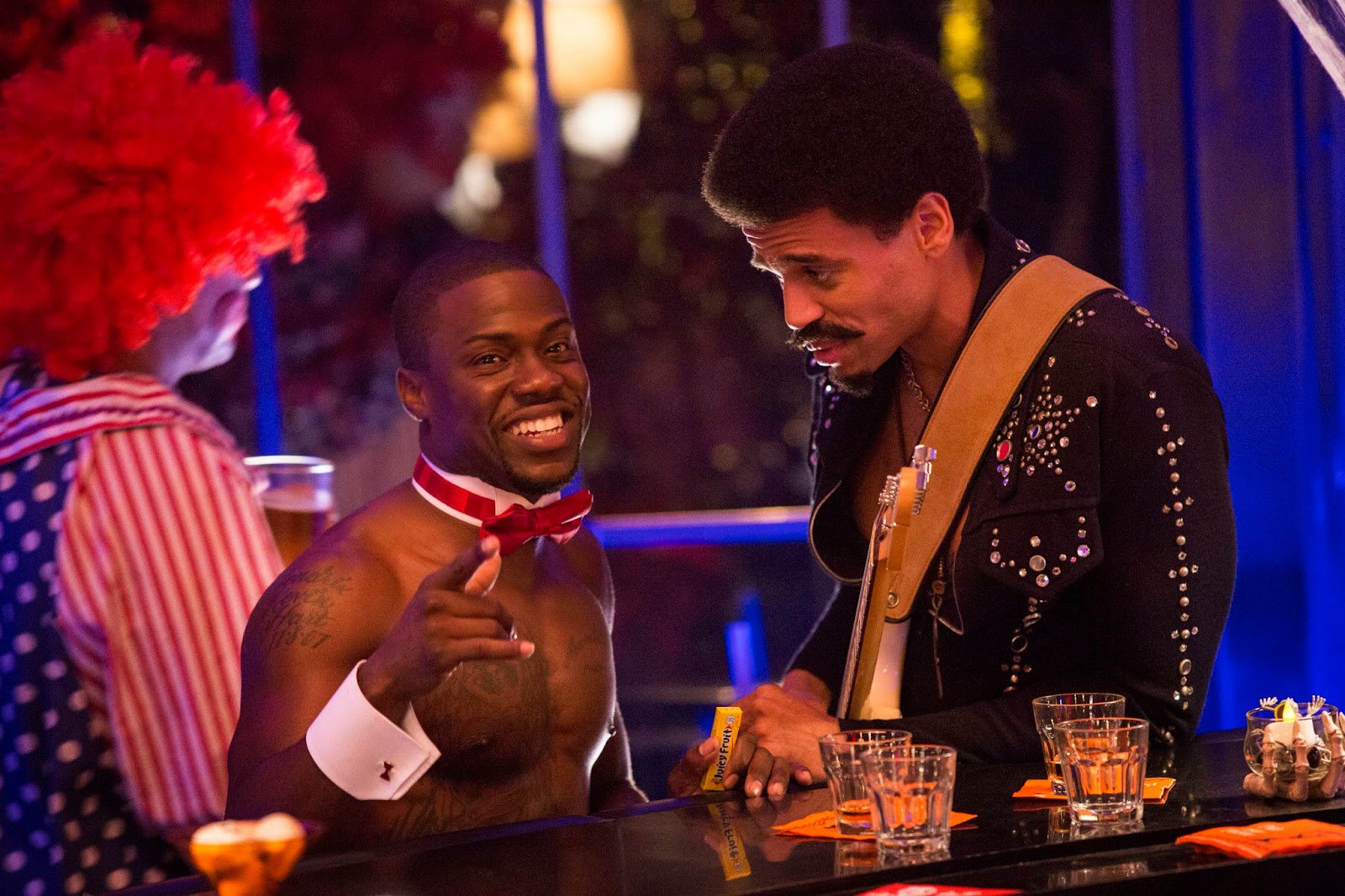 “Seriously … All the jokes you want to make about these outfits, stop it – We wanted to be Run-DMC but we couldn’t find the clothes!” Bernie (Kevin Hart, left) and his best friend Danny (Michael Ealy) enjoy themselves while in costume to celebrate Halloween in a scene from director Tim Story’s updated take on the 1986’s romantic comedy ABOUT LAST NIGHT. Credit: Matt Kennedy © 2012 Screen Gems Productions Inc. All Rights Reserved.

60 SECOND PLOT SYNOPSIS (OR AS CLOSE TO IT AS ONE CAN TRY TO MAKE): The second 80s remake of the week, the 2014 version of About Last Night removes the ellipses from its title and replaces its four leads with a quartet of African-Americans. Now starring in the role of Bernie Litgo is Kevin Hart, a fast-talking restaurant supply salesman who works alongside his best friend Danny (Michael Ealy, Almost Human). Hanging out at a bar one night in L.A., Bernie hooks up with Joan (Regina Hall), who retells the story of their initial tryst to her best friend Debbie (Joy Bryant). Preparing to meet each other at a local bar, Bernie brings the lovelorn Danny – who still isn’t quite over his ex Allison (Paula Patton) – while Joan brings along “boring” ‘ol Debbie.

And that’s where things get interesting. For once Bernie and Joan run off to have some more fun, Danny and Debbie decide to head home … They just didn’t expect that they might end up calling the same place “home” for the night. And waking up the next morning, neither is quite sure where things are heading …

WHO WILL LIKE THIS FILM THE MOST?: Michael Ealy fans, Joy Bryant fans, people waiting for Kevin Hart to show a little range in his movie roles, those who can appreciate the film for how it depicts its characters and their foibles with a concern and intelligence … And done in way under 2 hours.

WHO WON’T – OR SHOULDN’T – LIKE THIS FILM?: People adhered to the 1986 original, people who associate romantic comedies released around Valentine’s Day with “awful” automatically, those taken aback by adult language spoken by men and women, anyone who thinks that just because the 2014 version stars a predominantly African-American cast it is somehow not relevant to other cultures/segments of society.

BOTTOM LINE – IS IT GOOD, GREAT, BAD OR DOWNRIGHT AWFUL? It’s actually pretty good, making it a great date night option for Valentine’s Day and beyond.

WHAT’S GOOD (OR BAD) ABOUT IT?: Chemistry is a big thing in life. If you have chemistry on a team, you tend to be in contention for a championship. If you have chemistry around the work place, people tend to not leave and/or get fired often. If you’re a good comedian, you build a good chemistry/rapport/sense of timing with the audience coupled with snappy, well put together punchlines to leave them hanging on your every word … And if you’re in a good relationship, chemistry means it’s hard to think of yourselves apart because just about everything is in sync – the highs, the lows, etc. – and people want to root for you to be together.

First things first, those unfamiliar with the Rob Lowe/Demi Moore/Jim Belushi/Elizabeth Perkins film may be surprised to see Hart almost function as more of the sidekick to Ealy’s character, even though he showcases most of the same qualities that worked for Belushi’s character in the original movie while making the role his own. Don’t believe me? Watch the original 1986 trailer and then watch the one above to see the difference. Hart and Hall play each other’s antagonist so well that they are entertaining without ever becoming annoying.

What really makes things pop as well as they do is the chemistry between Ealy and Bryant. Nothing – from the early joys to the later miseries – feels forced or unnatural; instead, they approach their characters and more importantly each other in a fashion that everything feels organic from start to finish. They’re likable, they’re relatable and everything they do individually and with/to each other feels real.

You’re never thinking about what director Tim Story let things slip into oh, I don’t know, Baggage Claim territory in watching the film, which is a credit to his work in crafting the characters’ world in commendable fashion. (Sorry Paula Patton … But it was not a great movie! You are effective here as Ealy’s character’s ex, so that’s something, right?) About Last Night may not have the emotional range/impact of say The Best Man Holiday or unique characters that say a Crazy, Stupid Love might possess, but it does entertain without ever entertaining silly plot points or ideas that fail its mission.

That should be enough to keep plenty of happy couples viewing for many nights to come.