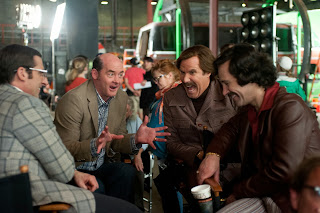 KEY CAST MEMBERS: Will Ferrell, Steve Carell, Paul Rudd, David Koechner, Meagan Good, Dylan Baker, Christina Applegate, Josh Lawson, Judah Nelson, James Marsden, Greg Kinnear, Kristen Wiig, Harrison Ford and the voice of Bill Kurtis … Plus a gang of other surprise cameo guests …
WRITER(S): Will Ferrell and Adam McKay
DIRECTOR(S): Adam McKay
WEB SITE: http://www.anchormanmovie.com/
60 SECOND PLOT SYNOPSIS (OR AS CLOSE TO IT AS ONE CAN TRY TO MAKE): Picking up with everyone’s favorite news team entering the 1980s, Anchorman 2: The Legend Continues once again stars Will Ferrell as Ron Burgundy, who has made the move from San Diego to New York with his co-anchor in both news and love, Veronica Corningstone (Christina Applegate). Enjoying their life in NYC with their 6 year-old son Walter (Judah Nelson), Ron and Veronica are now hoping to replace 35 year veteran newsman (Harrison Ford) in prime time on a major network …

Well, at least one of them will, anyway … And it’s not everyone’s favorite fan of scotch.

Dejected, Ron returns to his beloved San Diego only to be contacted by Freddie Shapp (Dylan Baker), a talent scout for the Global News Network (GNN), a new 24-hour cable news channel being launched by Australian airline magnate Kench Allenby (Josh Lawson). Re-assembling his news team brethren – sports anchor Champ Kind (David Koechner), investigative reporter Brian Fantana (Paul Rudd) and loveable dimwit weatherman Brick Tamland (Steve Carell) – Ron is eager to get back to New York. Then he meets his newest news nemesis: Jack Lime (James Marsden), the man with the coveted prime time spot Ron and his team – who are bumped to the graveyard shift – desire. So, what does Ron do once his ego is challenged by Lime and his new African-American female boss Linda Jackson (Meagan Good)?

He makes a bet that could affect not only his career, but the future of cable news as we know it …

WHO WILL LIKE THIS FILM THE MOST?: Will Ferrell fans, Steve Carrell fans, Paul Rudd fans of the first Anchorman film – that pretty much about covers it.
WHO WON’T LIKE THIS FILM?: People who didn’t like the first Anchorman film, people unfamiliar with how the news industry works, people who hate silly jokes and/or favor realism instead of being able to handle the world in which these characters of the first film
BOTTOM LINE – IS IT GOOD, GREAT, BAD OR DOWNRIGHT AWFUL? Rare is the comedy sequel that takes everything audiences loved about the first film and expands on it in both (1) sensible and (2) funny fashion so that it compliments the first film. Sure, there have been plenty of films that tried – The Hangover II, Teen Wolf Too, Caddyshack II, Blues Brothers 2000 anyone? – but so many have failed.

Well, while few will argue Anchorman 2 is better than the original, it definitely serves itself up as a great, funny follow-up.

It’s a known truth among actors that comedy is not as easy as it appears to pull off, let alone an ensemble comedy without having it go all Ocean’s Twelve.

WHAT’S GOOD (OR BAD) ABOUT IT?: There are two types of people in this world: Those who hold the original Anchorman film in a high place among the best comedies released in the last 20 years … And those who absolutely do NOT find it funny. If you’re in the first group, you’re going to find the second helping a cinematic afternoon delight. (If you didn’t get that reference, case in point …)

While not as classic as the first film, The Legend Continues does just as its title suggests by adding another chapter to the legend of the fictional Channel 6 news team by playing to each character’s strengths and weaknesses with great comedic aplomb. Ferrell delivers the one-liners, the unabashed swagger, surprising moments of sensitivity and ridiculousness you’ve come to expect from his Burgundy character, complete with new catchphrases, quirks and over-the-top moments that helped define it in the first place.

Likewise, each member of the supporting cast comes in and knocks out their respective parts, be it Koechner as the admittedly racist/sexist/closeted sportsman, Rudd as the would be ladies man and Carell as the ever-so-loveably stupid Tamland. The “core four” is as strong as ever in The Legend Continues; these are four actors that have their timing down and know how to play off each other. That’s what made the first film work so well and what makes the sequel continue to do so.

While Marsden and Greg Kinnear (as Ron’s new romantic foil for Veronica) are given just enough screen time necessary to keep the jokes moving along, the female cast members are given a bit more time to shine – and shine they do. Good delivers what Beyoncé Knowles likely hoped to do in that forgotten Austin Powers movie she did, knocking out jokes without coming off like an ethnic caricature and playing well off the other characters’ racial hangups. Applegate delivers the same effective turn she did in the film’s first go round and as Charni, the equally dimwitted GNN employee that catches Brick’s fancy, Kristen Wiig is a fitting compliment to Carell’s character.

Throw in a bunch of cameo appearances (count ’em all if you can), the return of Ron’s beloved canine buddy Baxter, plenty of verbal and physical sparring sessions and general zany, ludicrous, rapid fire jokes and The Legend Continues gives its fans what it wants: Laughs and plenty of them.