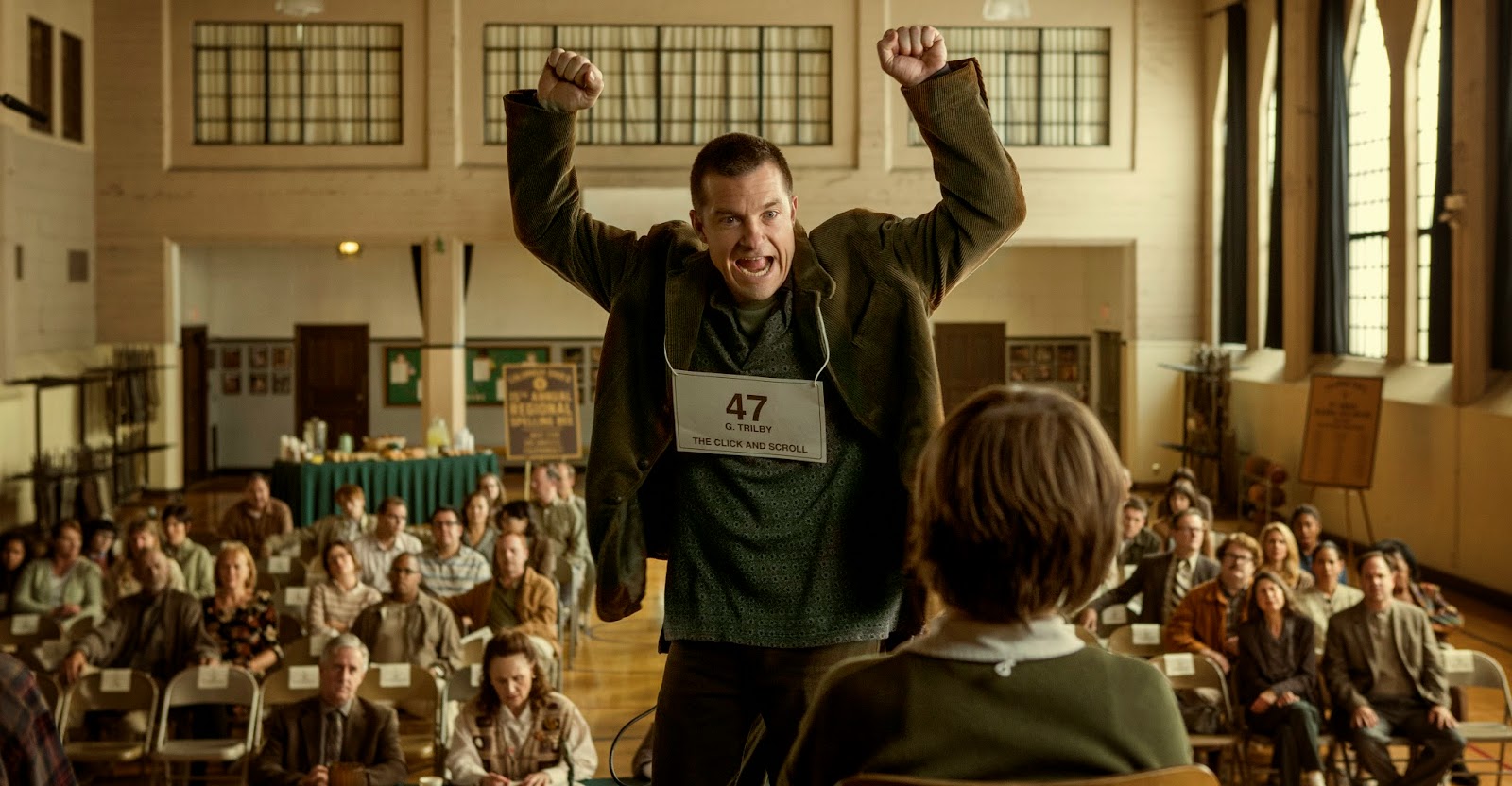 60 SECOND PLOT SYNOPSIS (OR AS CLOSE TO IT AS ONE CAN TRY TO MAKE): Making his directorial debut, Bad Words stars and features Jason Bateman as Guy Trilby, a 40 year-old resident of Columbus, OH, Guy has one thing on his mind: Winning the Golden Quill national spelling bee competition run by Dr. Bowman (Philip Baker Hall).

Of course, a 40 year-old man entering a spelling bee intended for children is sure to raise some eyebrows, which is why Guy finds a loophole and a national sponsor in the Click and Scroll, an online media outlet for which Jenny Widgeon (Kathryn Hahn) is a reporter. Once he finds his loophole, Guy proves himself to be not only a formidable speller, but a ruthless competitor who will stop at nothing to achieve his goal of winning … Even if only he knows why doing so is so important to him.

And as he moves up the spelling bee ranks, Guy edges closer and closer to the championship, much to the chagrin of Dr. Bowman and administrator Dr. Deagan (Allison Janney). In fact, the seemingly unstoppable force only has one thing possibly standing in his way … “That” being the presence of fellow competitor 10 year-old Chaitanya Chopra (Rohan Chand of Homeland), who is precocious as he is awkward and unassumingly charming …

WHO WILL LIKE THIS FILM THE MOST?: Fans of adults behaving badly; Jason Bateman fans interested in seeing him play against his usual type; fans of movies where children are able to act as prominently as their characters are featured

WHO WON’T – OR SHOULDN’T – LIKE THIS FILM?: People who hate seeing adults be abusive (verbally, mentally and/or physically) to children; people who like seeing a sweeter Jason Bateman

BOTTOM LINE – IS IT GOOD, GREAT, BAD OR DOWNRIGHT AWFUL? Sliding in between Bad Teacher and the better Bad Santa, Bad Words is a good comedy with a good bit of darkness that will tickle your evil side before eventually warming your heart.

WHAT’S GOOD (OR BAD) ABOUT IT?: Bateman has been acting a for a long time … A VERY long time, usually playing nice guys, well-meaning guys and generally good-natured guys (subtle differences, they are) who often find themselves pushed into awkward and/or ridiculous situations with great odds they have to overcome.

Well, in Bad Words, he’s not that. He’s a nasty, vindictive, foul-mouthed jerk who plans on crushing the dreams of little children and keeping people at a distance as best he can … And he’s still charming enough to make it all seem just fine as he takes you along for the ride. The jokes have bite, but Bateman’s ability to deliver them with sweet malice makes you enjoy them before you fully realize just how wrong what he said was.

While no one would likely be worried about his work on camera, some might justifiably wonder just how well Bateman’s knowledge of film might transfer behind one. Well, instead of picking a big budget, action-style blowout or period drama, Bateman simply sticks to what he knows: Telling a story interesting enough to draw you in, adding a few twists and turns and surrounding himself with a cast of capable actors that nail their marks in bringing the story to life.

Hahn, per her usual, shows just how versatile she can be in playing a softer character in Bad Words, serving as a morality compass for Bateman’s character as well as his occasional hookup. The biggest breakout star, however, is by far Chand. Delivering a performance that’s funny, heartfelt and endearing as any a child has delivered since Abigail Breslin in Little Miss Sunshine, Chand is capable to draw you into his character as well as a veteran actor twice his age while maintaining the necessary childlike sense of wonderment to do so.

But, Bad Words is Bateman’s showcase to do wrong – and in doing wrong so well, he delivers a film that will have you equal parts ‘ooohing’ before ‘awwing’ at its comedically-fulfilling climax.