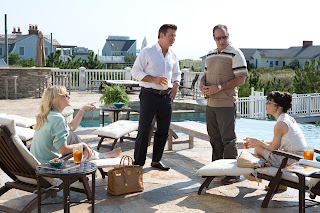 That’s led her to leave her posh New York digs for the modest accommodations of Ginger (Sally Hawkins), her San Francisco-based sister who lives with her two young sons (Max Rutherford and Daniel Jenks). Sally is also in love with her blue collar boyfriend Chili (Bobby Cannavale) … Who is not too much different from her ex, Augie (Andrew Dice Clay). Augie questions the whole situation of Jasmine coming to stay with her and not just because she and her sister aren’t close, but also because he hasn’t forgotten how Hal ruined the lottery windfall with which he and Ginger planned to start a business.

Now all reunited in their own unique way, life quickly becomes challenging for Jasmine. Be it her efforts to go back to school and learn how to work a computer, encouraging Ginger to explore a new relationship with Al (Louis C.K.) or her new job working for a dentist (Michael Stuhlbarg), the sweet life she new is completely gone (as a series of flashbacks reveal throughout the film), leaving her to cope with her new reality. But once she meets Dwight (Peter Sarsgaard), Jasmine sees a chance to regain the life she loved …

But is Jasmine able to love herself enough first to handle the world?

WHO WILL LIKE THIS FILM THE MOST?: Longstanding Woody Allen and/or Cate Blanchett fans, fans of movies with tragic figures, people who have visited San Francisco and appreciate its topography

WHO WON’T LIKE THIS FILM?: People who aren’t familiar with/hate Woody Allen movies, their pacing and dialogue, people who like films that end with a defined resolution, people who find Cate Blanchett polarizing, people who are tired of stories that focus on economy-related problems, those seeking a different resolution than the film offers
BOTTOM LINE: IS IT GOOD, GREAT, BAD OR DOWNRIGHT AWFUL? Due largely to a powerhouse, heartbreaking performance by Blanchett, great as so much so that you shouldn’t be surprised next year if and when the Academy Awards comes calling …

WHAT’S GOOD (OR BAD) ABOUT IT?: Blue Jasmine is possibly the finest, most well-rounded performance Blanchett has given to date and will likely earn her an Academy Award nomination next year … She delivers in making you feel every hardship her character faces, both real and imagined, giving you a sense of just why this woman is where she is at this point in time her life.

Under writer/director Woody Allen’s watchful eye, Blanchett makes Jasmine a tragic figure you are intrigued by, never letting her succumb to just being one-dimensional; no, this is a woman with layers, each one as complex, quirky, frustrating and endearing as the next. While the rest of the cast (Hawkins and Clay in particular) in supporting the journey, the story is led by its star with significantly effective results. If there is a complaint to be had regarding the film’s cast, it might be Allen’s usage of C.K. and Sarsgaard’s characters although each serves their roles well, prompting Blanchett and Hawkins’ to act in opposing manners effectively.

What Blue Jasmine does most effectively, however, is deliver a character examination of place as both physical and mental, happiness (what constitutes it for people in different walks of life) and purpose: For when Jasmine loses the identity she once had, her pursuit in retaining it is what will stick with you as you leave the theater. (Saying much more would ruin the film and that would be a tragedy in and of itself.)

In short, in Blue Jasmine we find a woman trying to find herself in the world only to discover she may not know what she is and in trying to get a grip on that, Allen and Blanchett grip the audience into watching her story at every turn. And when a film can do that without being pompous (especially when its lead character is the definition of pompousness), that makes for quality, albeit possibly somber, entertainment.