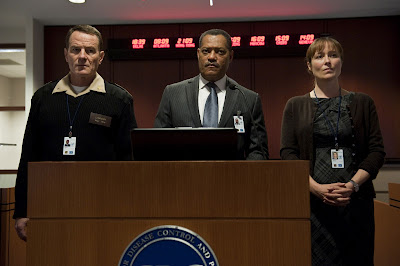 "Why is it a podium is used in a movie to announce horrible news 99.9% of the time?!" RADM Lyle Haggerty (Bryan Cranston), Dr. Ellis Cheever (Laurence Fishburne) and Dr. Ally Hextall (Jennifer Ehle) prepare to address the world in a scene from Steven Soderbergh’s new thriller CONTAGIon. Credit: Claudette Barius. © ©2011 Warner Bros. All Rights Reserved.

THE PLOT: The latest film to examine the idea of an apocalypse – this time in virus form – Contagion stars Gwyneth Paltrow as Beth Emhoff, a Minneapolis woman on a business trip overseas to Hong Kong. Returning home to the U.S. (with a 5 hour layover in Chicago), Beth notices she starts to feel sick … Which leads to her having a seizure and foaming at the mouth … Which soon thereafter results in her death at a local hospital. Shaken by his wife’s death, Mitch Emhoff (Matt Damon) is even more horrified to discover his stepson Clark (Griffin Morrow) is sick, resulting in his death soon thereafter. While it seems that he is immune, Mitch is not so sure that’s the case for his daughter (Anna Jacoby-Heron).

Meanwhile, Beth’s mysterious death – and the outbreak it subsequently seems to be causing in not only Minneapolis, but also Chicago, London, Paris, Tokyo and, – catches the attention of Dr. Ellis Cheever (Laurence Fishburne), deputy director of the Centers for Disease Control in Atlanta. Anticipating a panic – no doubt partially thanks to the efforts of Internet journalist Alan Krumwiede (Jude Law) – Cheever assigns Dr. Erin Mears (Kate Winslet) to head to Minneapolis to investigate.

She’s not the only one on the case, however. For the World Health Organization is sending Dr. Leonora Orantes (Marion Cottilard) to Hong Kong to see what she can discover there. Meanwhile, out in San Francisco, Dr. Ian Sussman (Elliott Gould) is looking at some samples from deceased victims of the mysterious disease hoping for a breakthrough of his own.

But as the panic – and body count – spreads and increases, the Contagion factor leads everyone to the same conclusion: Something must be done to stop the virus before the entire world falls victim to it.

THE TAKE: Contagion, despite its big name cast, is not a character-driven story, it’s a story-driven story. (If that doesn’t make sense to you, think about the difference between what you remember most from a movie like No Country For Old Men versus something like oh, I don’t know, The Ring. (Sorry – but that’s the best comparison I can think of right now!) It’s not that the acting is the not up to snuff as that is not the case by any means, it’s just that guessing [1] What’s happened [2] What will happen next [3] How far will the devastation go [4] What caused all this in the first place and the most interesting aspect, [5] Is this how an outbreak of this nature would play out in the real world.

What works very well in Contagion, is the attention paid by director Steven Soderbergh to showcase two things: The dire nature of the situation and the impact of the situation on all those both infected and affected. There are no wasted moments in the film, each one serving to showcase a different emotion (be it grief, confusion, despair, the lack of a kind man when mankind fears extinction) or the grim reality of what it would be like to try and handle/deal with a situation like this as both a regular citizen and someone in a position of authority.

While the subject matter is nothing new, it is refreshing via Soderbergh’s methods, which helps keep the film from having the "pulled from today’s headlines" feel to it into more of a "what if this really happened?" sort of who-done-it type of thriller. Save for one particularly raw moment of Paltrow’s character’s autopsy and the film is relatively free of anything remotely gruesome – instead, the terror is in watching how easily a disease of this nature could spread and cause panic (both imagined and real) and people to turn against each other (sometimes at a profit).

PARTING SHOT: A film more likely to increase sales of hand sanitizer, reduce the number of handshakes in social settings and reduce international holiday travel than not, Contagion does the job it sets out to do: Entertain you via a story that will make you think as much about what could happen in the real world as it does in the film.