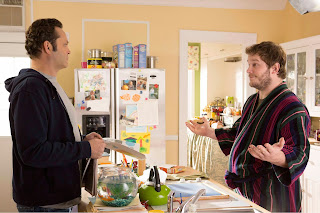 KEY CAST MEMBERS: Vince Vaughn, Chris Pratt, Bobby Monyihan, Cobie Smulders, Andrzej Blumenfeld, Simon Delaney, Britt Robertson, Jack Raynor, Adam Chanler-Berat and Stephen Ellis
WRITER(S): Ken Scott (screenplay); Ken Scott & Martin Petit (original screenplay “Starbuck”)
DIRECTOR(S): Ken Scott
WEB SITE: http://www.dreamworksstudios.com/films/delivery-man
60 SECOND PLOT SYNOPSIS (OR AS CLOSE TO IT AS ONE CAN TRY TO MAKE): David Wozniak (Vince Vaughn) works alongside at the family business with his married brothers (Bobby Monyihan and Simon Delaney) and their father (Andrzej Blumenfeld). The company’s meat delivery man, well-meaning enough, but a classic slacker in every aspect, which is why his girlfriend Emma (Cobie Smulders) is thinking of raising their child alone. (If she knew that David owes some rather unsavory people thousands upon thousands of dollars, that would probably not help his cause. Anyway …)

David finds himself with a bigger problem, however, on his hands (no pun intended) once he is informed of the following news:  The fertility clinic he donated sperm to nearly 700 times in the early 90s has used his samples to father approximately 533 children – 140-plus of which are about to sue the clinic in hopes of discovering who “Starbuck” – a.k.a. the name David used when donating – really is. Despite his best friend Brett (Chris Pratt) telling him it’s a terrible idea, David opens the envelope containing the names and information about all of the 140-plus kids that want to know who he is. And once he starts playing guardian angel to them individually without their knowing, he seemingly finds purpose in his life for the very first time.

But still, while David thinks this could be the best thing that ever happened to him, he realizes his friend Brett does have a point: It’s hard enough to deal with realizing you have one kid when you never knew you did previously, let alone 533 (and 140-plus of which are willing to do whatever it takes to find out who you are).

WHO WILL LIKE THIS FILM THE MOST?: Vince Vaughn fans, Chris Pratt fans, people who like movies with happy overtones, people who enjoy modern sitcom comedies
WHO WON’T LIKE THIS FILM?: People who can’t get beyond the plot and ancillary storylines, people who find Vince Vaughn annoying, people who prefer their comedy a bit more raucous and/or over-the-top
BOTTOM LINE – IS IT GOOD, GREAT, BAD OR DOWNRIGHT AWFUL? Despite a premise that could cause it to go off the rails quickly, Delivery Man
WHAT’S GOOD (OR BAD) ABOUT IT?: A film that is more of a return to form for an actor who’s kind of had some very forgettable forays lately (I dare you to find someone who gets excited every time they see The Watch has gone on sale yet again at Best Buy), Delivery Man features Vaughn doing what does best now that he’s full on into his 40-year-old-plus groove: Playing a likable slacker with a heart of gold who can be both the butt of the joke and the cause of its punchline as well.

Of course, Vaughn has some strong support in the form of Pratt who does a phenomenal job of producing comedy in moments where one might not expect it as well as adding some balance and sensibility to the story. Whereas Smulders isn’t really given enough to do but does it effectively enough, Pratt makes the most out of what could potentially been forgettable moments if left in the hands of someone with less care for his character.

Make no mistake, though – the film doesn’t work at all if Vaughn doesn’t nail his beats to balance out the more outrageous aspects of the story and underwhelming performance of some his newfound sons and daughters. As he excels at, Vaughn makes David a lovable loser who eventually finds his way and that, in effect, is what keeps Delivery Man from being DOA.