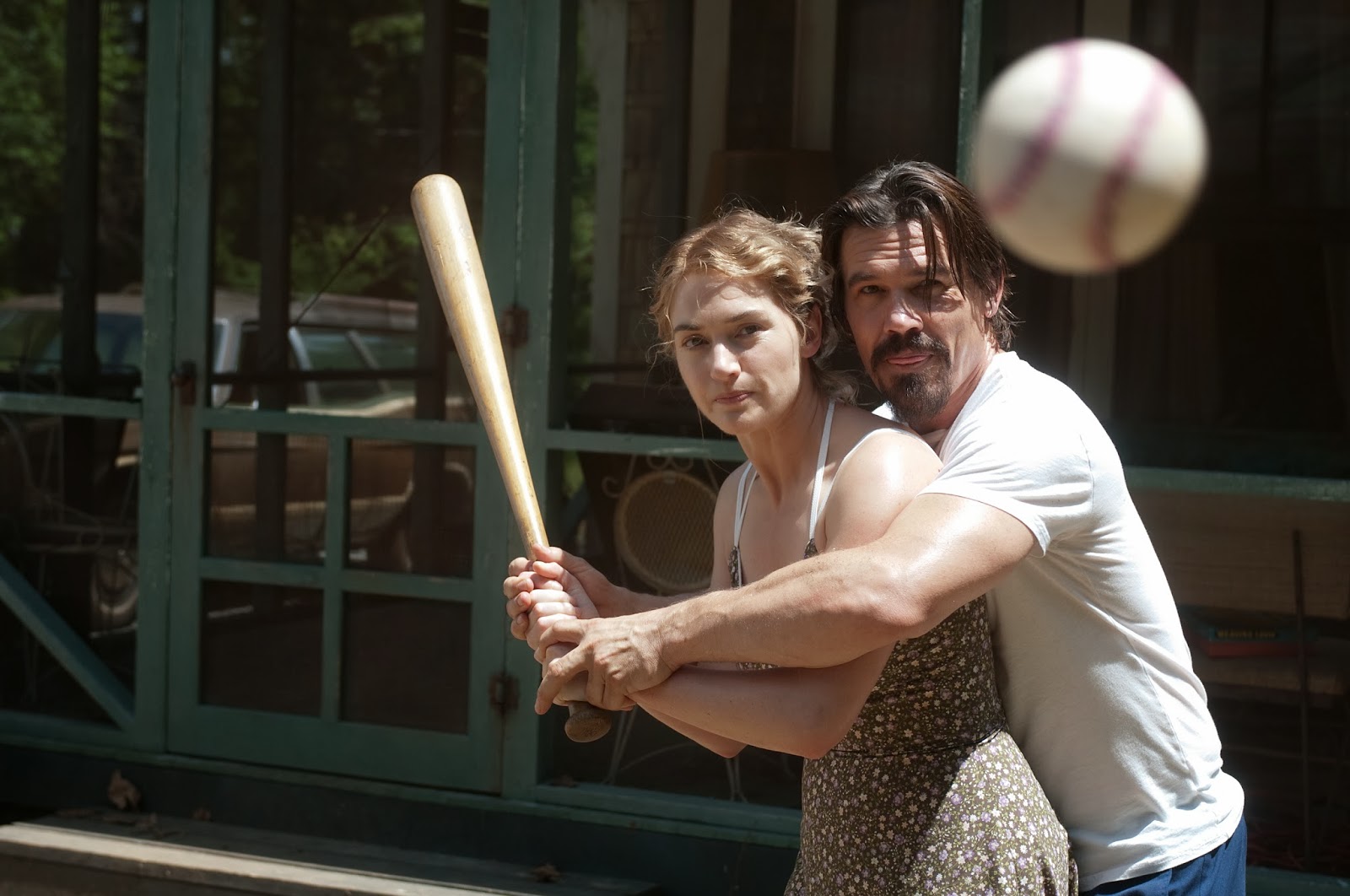 “Girl, if you can hit this ball, I’m convinced I can get either the Cubs or Yankees to at least offer you a minor league contract!” Adele (Kate Winslet) and Frank (Josh Brolin) enjoy a moment together in a scene from director Jason Reitman’s drama LABOR DAY. Credit: Dale Robinette © MMXIV Paramount Pictures Corporation. All Rights Reserved.

WRITER(S): Jason Reitman (screenplay); Joyce Maynard (novel on which the film is based)

60 SECOND PLOT SYNOPSIS (OR AS CLOSE TO IT AS ONE CAN TRY TO MAKE): Set in 1987’s New Hampshire, Labor Day stars young Gattlin Griffith as Henry. Also known by his nickname of Hank, Henry is the son of Gerald (Clark Gregg) and Adele (Kate Winslet), his mother with whom he lives. You see, some years ago, Gerald and Adele split up so that he could go be with his secretary while Adele … Well, she never quite recovered, essentially becoming a shut-in with shaky hands who only seemingly leaves her home to go shopping for groceries. (Where Adele gets the money is anyone’s guess since she’s not seen working a job and Henry is just entering 7th grade).

It is on one of those faithful trips to the local Pricemart where Frank (Josh Brolin) inadvertently makes Henry’s acquaintance, convincing – or should that be charming? … Or better yet strong-arming? – a ride home with the mother-son duo. It is at their home where Frank reveals why he needs their assistance: He’s escaped from a nearby prison after being taken to a hospital for a medical procedure. He promises to leave their home soon as he hears a train that he can hop on and escape town … Which is going to be harder than he originally envisions once the local media, police and Adele’s neighbors catch wind of the story.

As Frank spends time with Adele and Henry over the course of this fateful Labor Day weekend, it seems as if he has a natural fit in their lives as the father Gerald has never been to Henry and the man Adele’s so desperately needs in her life. Fellow youth but WAY too worldly for her age Mandy (Maika Monroe), however, has plenty of stern words of wisdom for Henry that make him question Frank’s true motives … But despite her objections warnings, Henry senses their is something about Frank that belies his criminal past.

But can anyone truly start over when their past haunts them to present day? That question remains to be seen – unless you see the movie.

WHO WILL LIKE THIS FILM THE MOST?: Josh Brolin fans, Nicholas Sparks fans who wish his movies had more of a sense of self-awareness to them, people who love the pottery scene in Ghost and fans of classic star-crossed lovers stories.

WHO WON’T – OR SHOULDN’T – LIKE THIS FILM?: People who absolutely hate anything remotely resembling a Nicholas Sparks movie, those that can’t get past the film’s premise; people who go into the movie convinced they won’t like it (as they will find something in the film to key on and dislike).

BOTTOM LINE – IS IT GOOD, GREAT, BAD OR DOWNRIGHT AWFUL? While not perfect by any means, Labor Day is a good early romantic experience for a date night in 2014 thanks to the dedicated performances of its stars and self-awareness exhibited by both the cast and screenwriter/director Jason Reitman.

WHAT’S GOOD (OR BAD) ABOUT IT?: What is the measure of a good actor? Is it the ability to make you care and take an interest in their character, one that may seem stereotypical at first glance? Is it someone who can use subtlety effectively enough to override a story that – on its surface at least – should not only be intriguing, but laughable at best? Perhaps it’s someone that can effectively dole out humor, strength and compassion that it elicits similar reactions from the audience watching?

In the case of Labor Day, the answer lies in the performances of its three leads and their ability to turn what should be a bad Lifetime movie of the week into a very watchable big screen experience.
While Winslet does her best to make her scorned by love character workable, Brolin and Griffith do the heavy lifting to make Labor Day rise above pulp romance. While Brolin does strong and silent very well, the younger Griffith does an excellent job portraying his role. Not only does Griffith’s performance come across in a believable fashion, bringing you into the world of his character so that every aspect of what he is experiencing feels fresh, daring and – while not life-changing to the audience – life changing in regards to his character. That is what in turn helps to make Brolin’s performance so effective under the direction of the writer/director Jason Reitman.

Could the film be easily dismissed as a lonely housewife, Harlequin romance movie of the week? Yes – if it wasn’t for how well executed Labor Day is. The characters aren’t caricatures, the actors don’t make obvious, typical-for-an-outrageous-concept-romance choices and the storytelling isn’t rushed and filled with this has to happen in order for this to work moments. Much like the story at its center, Labor Day tells the story in a fashion where it feels as natural as the love that grows out of an unnatural situation – and that’s where it succeeds.

And while you don’t need to rush out and take a holiday to see it, Labor Day is more enjoyable than your average holiday romantic excursion.

Chic Spotlight: Choc on the Wild Side