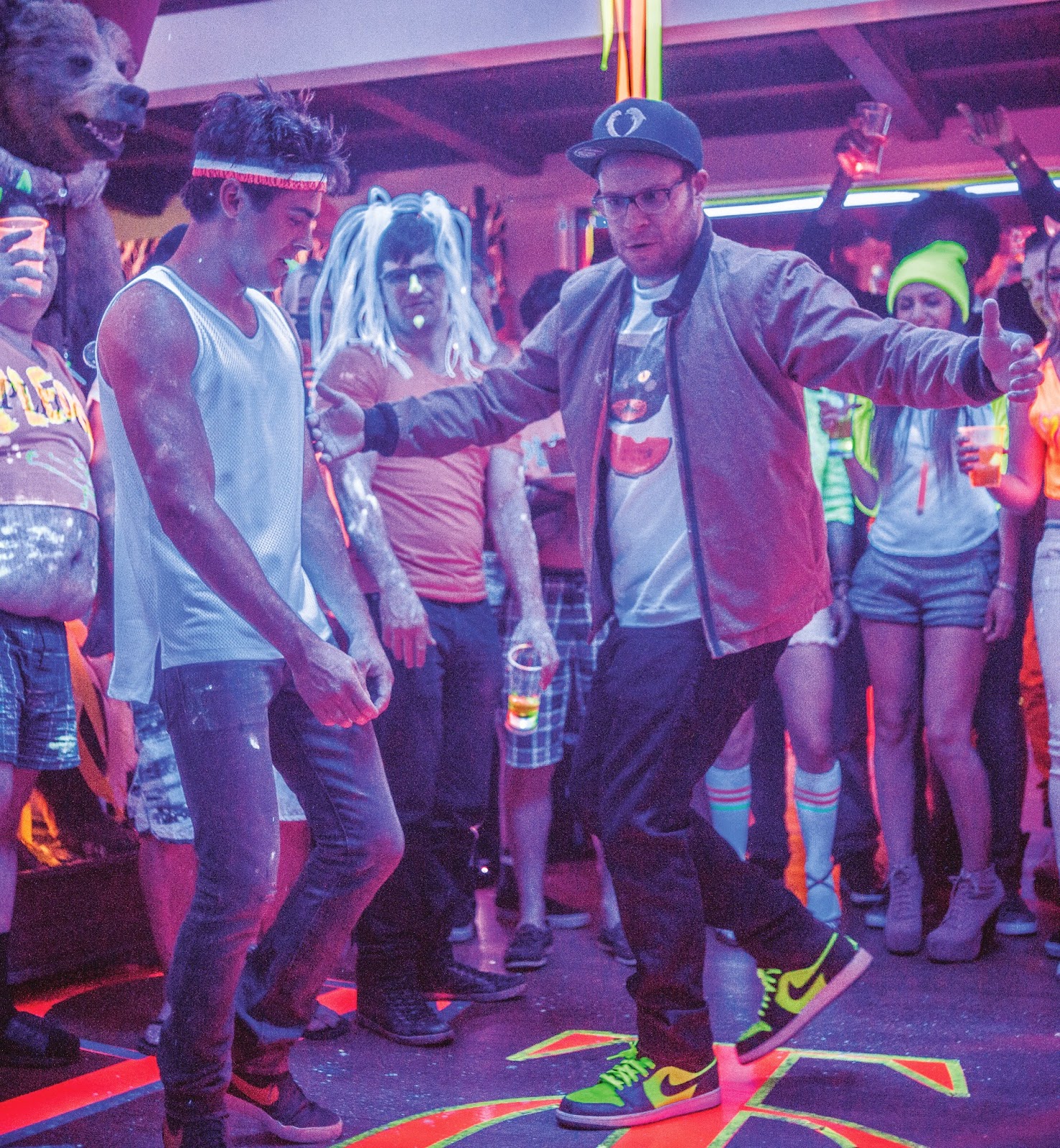 “Oh snap – I’m about to bust out some funky fresh fly steps and some other outdated slang to go with it.” Teddy (Zac Efron, in headband) dance battles his neighbor Mac (Seth Rogen) in a scene from director Nicholas Stoller’s comedy NEIGHBORS. Credit: Glen Wilson © 2014 Universal Pictures. All Rights Reserved.

60 SECOND PLOT SYNOPSIS (OR AS CLOSE TO IT AS ONE CAN TRY TO MAKE): Mac Radner (Seth Rogen) and his wife Kelly (Rose Byrne) are a happy married couple. Having bought their first home, the couple is settling in nicely with their newborn baby Stella (Elise and Zoey Vargas) and generally enjoying life – at least a lot more than their now-divorced friends Jimmy (Ike Barinholtz) and Paula (Carla Gallo).

Then they find out they are getting new neighbors: Delta Psi Beta, led by Teddy (Zac Efron) and his vice-president Pete (Dave Franco) who have a quest in mind: Throwing the ultimate party to end up on the fraternity’s wall of fame.

Determined to make things work out so that they can enjoy their home and be good parents to Stella, Mac and Kelly attempt to make nice with their new neighbors, making one simple request: Keep the noise down at night so they and their daughter can get some rest. In return, Teddy has one simple request for Mac and Kelly: If they are ever too loud, simply let them know ahead of time before they think of calling a cop like Officer Watkins (Hannibal Buress).

Is there going to be a problem? Well, if there was no conflict, we’d have no movie, now would we?!

WHO WILL LIKE THIS FILM THE MOST?: Seth Rogen fans, Dave Franco fans, Rose Byrne fans, people who like raucous comedies but are not too worried about script cohesion

WHO WON’T – OR SHOULDN’T – LIKE THIS FILM?: People who have come to expect more from a Seth Rogen comedy, people who like a more developed script, those who don’t like profanity and nudity-filled comedies

BOTTOM LINE – IS IT GOOD, GREAT, BAD OR DOWNRIGHT AWFUL? Neighbors is one of those movies that is funny in sections, but feels very disjointed in some other parts before coming together in the final act. In other words, it’s lot like real neighbors – not many of us know who they are, but if we are fortune enough to enjoy their company, we do … In the right doses.

WHAT’S GOOD (OR BAD) ABOUT IT? Neighbors is one of those movies you can tell the cast had a LOT of fun making; unfortunately, given it’s disjointed, uneven and – even by Seth Rogen comedy standards – juvenile jokes at times, the movie feels a bit rushed and unfinished for much of its first 60 minutes. While Rogen does what Rogen does and Efron is fine in his continuing effort to transition into more adult roles and leave his tween days behind, it’s Franco, Byrne and MadTV alum Ike Barinholtz that get in the majority of the good jokes and leave the stronger impression.

The chemistry amongst the various actors is really what saves Neighbors for the most part, even when the other secondary characters falter (mainly due to the actors playing them comes across as uncomfortable as the people playing them feel). Then again, there are times where the film feels as if it is fighting itself on how ribald, how long and/or how intense to play a joke, which for someone with Stoller’s comedic resume (save for his work on the recent nowhere-near-as-good-as-it-should-have-or-could-have-been incident that was Muppets Most Wanted) should not be the case. If you’ve seen the film’s trailer, you get that “I already know it’s not going to be much funnier than what I’ve seen here” feeling, which is the opposite of what you want from a comedy trying to convince you to come see it.

Still, when you have Byrne and Rogen as committed to making what they do have work coupled with a VERY cute baby, Neighbors makes for a quirky, fun diversion … But you’ll definitely be glad that, at 96 minutes, it doesn’t overstay its welcome.