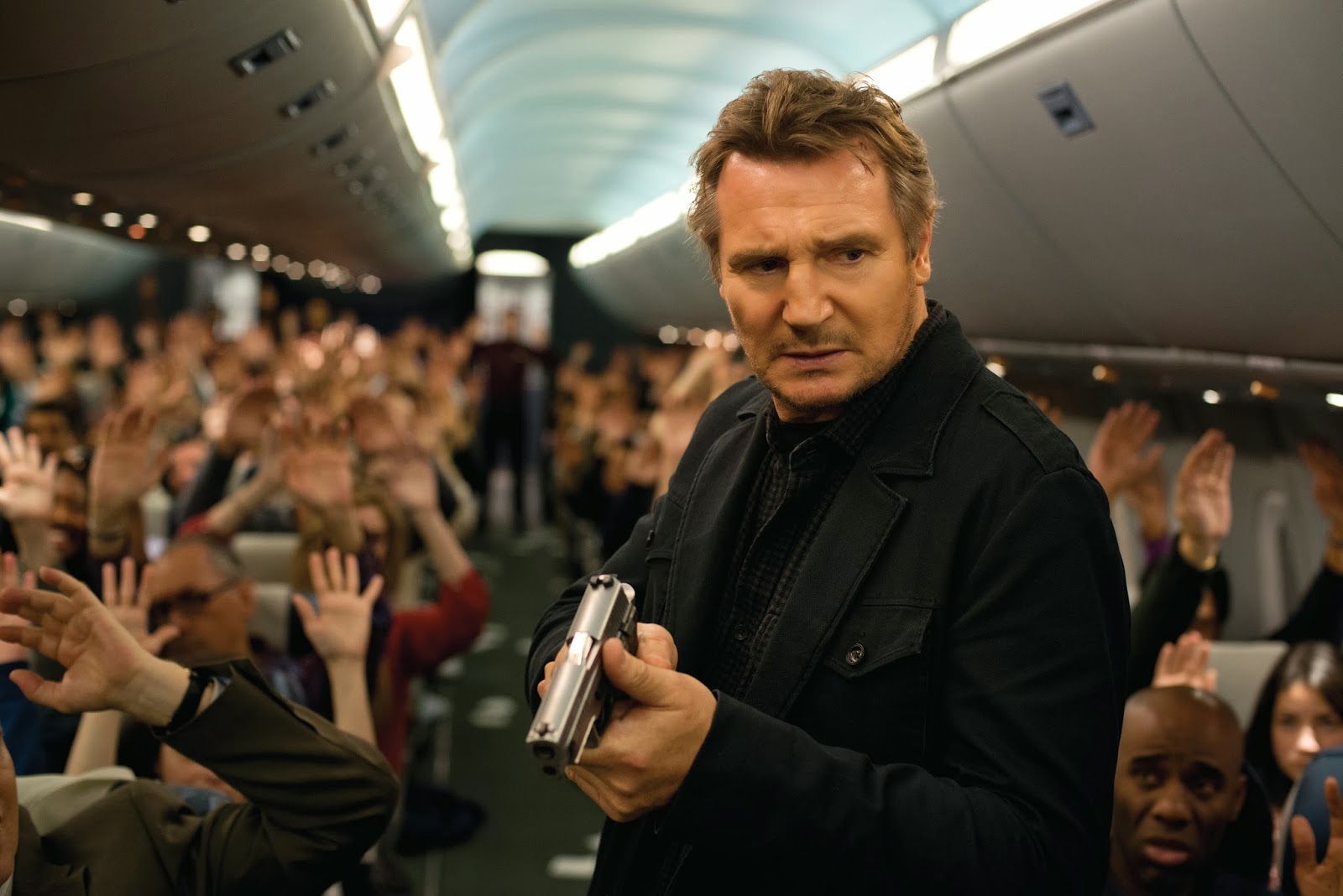 “Now, unless you want me to use this gun, EVERYONE give me your peanuts NOW!” U.S. Air Marshall Bill Marks (Liam Neeson) has his gun drawn but struggles to figure out who or whom is the target in a scene from director Jaume Collet-Serra’s 40,000 feet in the air action drama NON STOP. Credit: Myles Aronowitz © 2014 Universal Studios. All Rights Reserved.

60 SECOND PLOT SYNOPSIS (OR AS CLOSE TO IT AS ONE CAN TRY TO MAKE): Resisting the urge to go into Key & Peele mode, Non-Stop stars Liam Neeson as Bill Marks, a federal air marshall … with a drinking problem. Despite his job and possibly because of his addiction, Marks is not a good flyer.

And unfortunately for him, his day is about to get a WHOLE lot worse.

Boarding a flight bound from the US to London, the Northern Ireland-born-turned U.S. Air Marshall gets a rather disturbing message soon after the plane is in the air: Someone has hacked into the private network he and fellow air marshall Jack Hammond (Anson Mount) are communicating on, relaying a very disturbing message to Marks: Deposit $150 million into a private bank account or someone on the plane will die every 20 minutes. Realizing the threat is indeed real, Marks alerts the only two people on the plane he feels he can trust: Nancy (Michelle Dockery), a flight attendant he’s known for years and Jen Summers (Julianne Moore), a passenger in desperate need of a window seat upon boarding the plane.

But as Marks tries to figure out just exactly what is going on and who’s behind it, one thing becomes perfectly clear: He is running out of time – and any of the 150 passengers on board the plane could be the one gunning for his demise …

WHO WILL LIKE THIS FILM THE MOST?: Liam Neeson fans, people who enjoy whodunit capers, anyone who’s thought about how they would respond if they had to play detective at 40,000 feet

WHO WON’T – OR SHOULDN’T – LIKE THIS FILM?: Anyone scared of flying, people who pick apart plot holes in action movies, those tiring of Liam Neeson’s action movie schtick

BOTTOM LINE – IS IT GOOD, GREAT, BAD OR DOWNRIGHT AWFUL? Don’t let the premise fool you: Non-Stop isn’t a classic, but it is surprisingly entertaining … Unless you’ve got a plane to catch.

WHAT’S GOOD (OR BAD) ABOUT IT?: There is really no reason to go too deep into the analytical abyss when it comes to most action/thriller flicks: They either blow a lot of stuff up while having their hero spout catch phrases, dwelve into deep, dark places of the world/human psyche and/or try to show the balance between good and evil before setting up a final conflict.

Non-Stop is not really any of those three, though – it’s a simple whodunit that just so happens to involve an airplane, a finite amount of time and Liam Neeson at his usual grizzled best trying to make the best out of a very difficult situation. Fortunately, the difficult situation isn’t the movie itself.
Now, save for the fact there seem to be some potential glaring plot holes (let’s just say if you think about a certain suitcase’s origins and the timeline of events, certain things might not make sense), Non-Stop plays things in real time with otherwise sensible actions. 80’s-style cartoonish-ness gives way to interesting twists and turns, none of the characters tip their identities too much and the final villain reveal is on par with most movies of its type. Red herrings keep you from getting too ahead of the story while still managing to not veer off course (no pun intended) and the pacing never moves too slow or fast for it’s own good.
So while the film is far from being a first-class classic, it also doesn’t fly coach. Think of it as economy class experience – it does the job until you make another trip to the theater, Neeson proving himself to be a worthy pilot of the journey … Despite all of the bad flying puns I made.
OVERALL RATING (OUT OF FOUR POSSIBLE BUCKETS OF POPCORN):