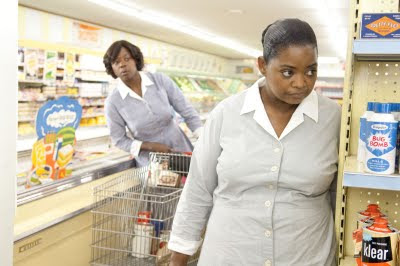 Aibileen and Minny spend their days plying the family trade working as maids, essentially raising the children of their employers, Aibileen’s being Elizabeth Leefolt (Ahna O’Reilly) with Minny’s being the socialite-in-training Hilly Holbrook (Bryce Dallas Howard). Aibileen and Minny are good at their jobs – great, even – but no matter how good they are, there’s one thing that is never going to change. Minny and Aibileen, like all the other maids in town, are black. Their employers, however, are Cacausian (i.e. white), and they all live in the South, which means that the blacks are subject to things such as "colored" restrooms and all the rest of the indignities that come with "separate but equal" society life at the time.

A recent graduate of Ole Miss, who is more invested in getting her journalism career off the ground than she is in meeting a potential husband in the form of Stuart Whitworth (Chris Lowell). Although that reality comes as to the dissatisfaction of her mother Charlotte (Allison Janney), Skeeter is more interested in impressing Ms. Stein (Mary Steenburgen), an editor who holds her future as a writer in New York City in her hands. While she has impressive talent, Skeeter – or Eugenia, if you prefer – lacks experience, and the only job she can get in Jackson is writing responses to readers’ questions in a housekeeping column.

Not one to be deterred, Skeeter takes the job only to quickly realize she needs to get tips from the only ladies in town she knows who really know how to take care of a house – maids like Aibileen and Minny. But as she starts to handle the beat, Skeeter – who grew up under the care of a kindly older maid named Constantine (Cicely Tyson) – begins to take notice of the unspoken injustices suffered by maids (or "the help," if you will) on a daily basis.

Seeing an opportunity to make a difference and impress Ms. Stein, Skeeter confidentially comes to Aibileen with a proposition: Aibileen will tell her about her experiences working for white families, and she will do her best to protect her identity while sharing her compelling story with the world. It’s a risky proposition for sure, but is it one that Aibileen can pass up?

The answer comes in the form of a very moving story you’ll have to watch for yourself.

THE TAKE: Let me say this first. I loved The Help and will explain why here shortly. I need to say something else first. Sadly, I fear The Help is one of those movies that will either be an instant hit or fall into the category of "movies that the people that need to see this movie the most likely never will." I say that not because of any fault of the movie, which, if you haven’t figured out by this point, is phenomenal as a whole, but because of a few inherent problems that are not the film’s fault (nor responsibility) – trying to convince people of this story – which while familiar in topic/subject matter is not in its execution, convincing people that this is a story they should want to see regardless of their race/ethnicity and most importantly, they will leave the theater feeling better that they did.

Look, I’m not going to sit here and pontificate about how racism still exists in the world; if you don’t know that, stories like this one likely mean nothing to you, and you refuse to realize that Barack Obama’s election, contrary to belief in some circles, has not eliminated that issue from the world.

What The Help will do, however, is provide an entertaining history lesson that is executed nearly flawlessly from start to finish, thanks to a stellar collection of performances from its cast under careful direction.

It’s hard – very hard, in fact – to create what will for one feel like a fresh take on the Civil Rights movement and second, an organic (meaning: not forced) one. Fortunately, screenwriter Taylor and her crew do just that in The Help. As opposed to many films where it shows blacks and whites apart in their own worlds, The Help does a marvelous job at showcasing the two cultures living together, side by side and how yet subtle injustices occur and worse yet, accepted until they reach a breaking point. Despite raising children, preparing meals and basically performing all the tasks their employers are supposed to do to run their households, "the help" are ultimately often viewed as nothing more. And the exploration of this recurring theme and how it evolves throughout the film helps make it a compelling, engaging experience from start to finish. I’m (fairly) certain that factor helped make Stockett’s novel a bestseller, and it is not lost in the big screen adaptation.

This, of course, would not be the case without the stellar performances of the cast, especially the efforts of Davis and Stone.

Davis has earned Academy Award nominations for her work onscreen before, so delivering an emotionally stirring performance is nothing new to her. She presents Aibileen as a complex, tough character with a set of principles who knows the reality of her situation. She does not, however, succumb to a stereotypical "strong black woman" resolve where she is overly emotional to drive home a point; instead, she exhibits an equal amount of sensitivity, intelligence and determination so that Aibileen becomes a role model for women of all backgrounds.

Stone, like her Crazy, Stupid, Love co-star Ryan Gosling, is quickly establishing herself as one of the best young actors of her generation, The Help making her strongest impression yet in that regard. While headstrong and determined and sensitive to her subjects’ cause, Skeeter never comes off patronizing, driven by "white guilt" or a crusader who lets her own desires (in this case, to be a writer) outweigh the genuine good she is trying to achieve in the process.

While Spencer may be the lesser-known of the three major stars, her performance is a very well-executed mix of comedy without bufoonery and solid resolve. This helps make her onscreen relationship with Jessica Chastain (whose equally-excellent performance as Celia Foote illustrates in a not-so-subtle manner what it’s like to be ostracized in society for dumb reasons) that much more entertaining. The friendship between the two characters shows an appreciation and respect for each other, a desire that cuts across all racial, religious and cultural lines.

Last but not least, Howard’s performance (which is unlike any role we’ve seen her in before) is great because she embraces the rule that any pro wrestler worth his or her weight in arena popcorn knows: To be a great villain, you have to not only embrace yourself as a villain, but not see yourself as such. Much like the time period itself, The Help features many foes to choose from for your disliking, but the sheer nature in which Howard – whose character is a prime example of a "this is just the way it is, and I’m not doing anything that others in my position wouldn’t have done" nature is perfect.

It all adds up to a fantastic experience that will stay with you long after you leave the theater – which hopefully is not a "novel" idea (pun intended), given its contents.

PARTING SHOT: While it remains to be seen which awards (if any) it wins from the Academy, The Help is sure to win a lot of hearts, be they black, white, male, female, old or young alike.