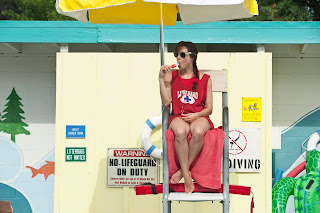 “Hey LL Cool J – it’s not a lollipop, per se, but I can still be an around the way girl if you’re interested!” Brandy Klark (Aubrey Plaza) tends to the pool – and hopes to entice a few gentlemen in the process – in a scene from writer/director Maggie Carey’s coming-of-age comedy THE TO DO LIST. Credit: Bonnie Osborne © 2013 CBS Films. All Rights Reserved.

60 SECOND PLOT SYNOPSIS: Inspired by writer/director (in her cinematic debut) Maggie Carey’s own experiences growing up, The To Do List stars Aubrey Plaza as Brandy Klark, a teenager living in Boise, Idaho in 1993. Her high school’s valedictorian, Brandy is a whip-smart Hilary Clinton fan is who is all set to go to Georgetown for college with her study-buddy Cameron (Johnny Simmons), never letting herself get distracted from her goals. She is the polar opposite of her sister Amber (Rachel Bilson), who was on the pill at at age 15 much to the chagrin of her judge father (Clark Gregg). Amber and Brandy’s mother (Connie Britton), however, is not as uptight about the whole matter.

Then she inadvertently lets her best friends Fiona (Alia Shawkat) and Wendy (Sarah Steele) taker to a high school keg party where she tastes alcohol for the first time, ends up getting wasted and making out – albeit haphazardly – with the irresistible Rusty Waters (Scott Porter). The embarrassing incident makes Brandy realize just how inexperienced she is with the opposite sex, leading her to create a “to do” list of sexual activities she wants to achieve before she leaves for college, culminating in actual intercourse with one Rusty Waters.

Thus, one can imagine her surprise when she arrives at her summer job at a neighborhood pool the next day where she discovers that, in addition to working with Cameron, Derrick (Donald Glover) and her ne’er do well boss Willy (Bill Hader), she will also be working with Rusty.

So will her to do list help, complicate or completely obliterate her chances of achieving her goals? There’s only one way to find out!

WHO WON’T LIKE THIS FILM: Parents who don’t want their teens watching sexually-charged movies, people who get grossed out by sexual things in movies, people who didn’t like Superbad (noticing a theme here yet), devoutly faithful people (particularly those of Mormon heritage), people who have a hard time dealing with their own sexual hangups/stigmas
BOTTOM LINE – IS IT GOOD, GREAT, BAD OR DOWNRIGHT AWFUL? It’s pretty great – and that’s quite an achievement for a first-time filmmaker.

WHAT’S GOOD (OR BAD) ABOUT IT?: Possibly best described as Superbad for the female gender, The To Do List (which is NOT the screenplay’s original title!) works because of the honest manner in which Plaza conveys all of Brandy’s naiveté, awkwardness and slow learning in situations that are obvious to everyone but her. More than willing to play into the joke without becoming a joker herself, Plaza does an excellent job at balancing all of Brandy’s idiosyncrasies with Shawkat and Steele serving as her mentors/cheering section/advisors to great comedic effect. Bilson and Hader are equally impressive as Amber and Willy, respectively, providing nice counterparts for Plaza’s character to spar with before eventually helping her – all without falling victim to lazy comedic joke trappings and retaining an underlying sense of humility that serves the film well.

While a large amount of credit has to go to the film’s cast for bringing the film together, writer/director Maggie Carey gets to take home the prize for crafting an original, entertaining film that balances over-the-top comedy with emotions and feelings that feel authentic to its subject matter. (Then again, given that Carey is writing from her own personal experience, it’s kind of hard to screw that up.) Carey effectively uses the style, music and attitudes of the 90s to great effect throughout the film, creating the vibe in which her actors can utilize to great effect. Then again, Carey helps lead them through with great pacing and comedic timing; while, it’s easy to make sex jokes or talk about being awkward during adolescence; it’s another thing entirely to make it entertaining and not a goofy, silly and/or falling victim to catering to one extreme (usually a romantic undercurrent) or another. The To Do List simply presents you with a young girl’s story and takes you through it, one hilarious situation at a time to bring you into the character’s world and make you laugh along as she figures life – or in this case, her sex life – out.

Given how well The To Do List does that, it would be a shame it seeing it wasn’t near the top of any comedy fan’s to do list this summer at the movies.