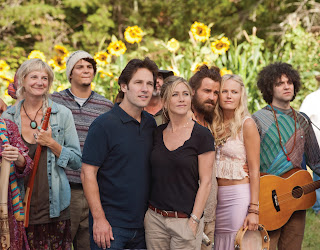 “This will not be the cast photo of the next Tyler Perry movie!” George (Paul Rudd) and Linda (Jennifer Aniston), center (embracing), share a moment with various members of the Elysium “intentional community,” including Kathy (Kerri Kenney-Silver, in denim shirt), Seth (Justin Theroux, with beard), Eva (Malin Akerman, next to Theroux) in a scene from the unofficial reunion of comedy troupe The State, Wanderlust, directed by David Wain. Credit: Gemma La Mana © 2012 Universal Pictures. All Rights Reserved.

KEY CAST MEMBERS: Paul Rudd, Jennifer Aniston, Justin Theroux, Alan Alda, Kerri Kenney-Silver, Malin Akerman, Joe Lo Truglio, Kathryn Hahn, Michaela Watkins, Jordan Peele, Ken Marino, Lauren Ambrose, Todd Barry, Linda Lavin and some other recognizable faces from The State.
WRITER(S): David Wain and Ken Marino
DIRECTOR: David Wain
WEBSITE: http://www.wanderlust-movie.com/Wanderlust/home.html
THE PLOT: Produced by Judd Apatow, directed by David Wain and serving as an unofficial reunion of comedy show, The State (as best known from their days on MTV in the 90s), Wanderluststars Paul Rudd as George and Jennifer Aniston as Linda. Living together as husband and wife in New York City, George and Linda are enjoying life. After all, George has a steady job where he works with his friend, Sherman (Todd Barry), Linda is pitching a new penguin documentary to HBO and their realtor (Linda Lavin) has just helped them find a new “micro loft” in the West Village.

Then George loses his job, Linda has a rough meeting, and the couple find themselves en route to Atlanta to work for and live with George’s loudmouth, loutish brother, Rick (Ken Marino), and his wife, Marissa (Micaela Watkins).

As it happens, however, George and Linda get tired during their drive and decide to stop overnight at the first place they can find: Elysium, a bed and breakfast that also doubles as a hippie-style, vegetarian, free-loving “planned community.” Co-founded by Carvin (Alan Alda) in 1971 with several of his friends, the property now serves as the home to a colorful cast of characters, to say the least, including Seth (Justin Theroux), who is severely technologically out-of-date, former NYC resident Eva (Malin Akerman), life partners Rodney (Jordan Peele) and the very-pregnant Almond (Lauren Ambrose), super earth-centric Karen (Kathryn Hahn) and Wayne (Joe Lo Truglio), a wine maker who also aspires to be an author, all while embracing life as a nudist. (If you do not like seeing nudity, let alone male nudity, in a movie, consider yourself warned.)

Elysium is a definite shock to the system, for sure, but the happiness all its members enjoy sure seems nice and enticing to George and Linda. But then again, so does anything when you’re being forced to live with a blowhard and you’re destitute, right?

Which life will George and Linda choose? There’s only one way to find out.

THE TAKE: Are you a fan of the likes of The State or the various offshoot projects (Reno 911, Stella, Michael & Michael Have Issues and more specifically, Wet Hot American Summer)?

How about the works of Apatow, such as The 40-Year-Old Virgin, Forgetting Sarah Marshall or more recently, Bridesmaids? Do you smile whenever you think about Rudd’s performances in films such as Role Models or Knocked Up?

If the answer to any if not all three of these questions is “yes,” you should know what you’re getting in to with Wanderlustand enjoy it immensely.

There are certain people in the entertainment field who know what they do well. In the case of Apatow, Wain, his State co-horts and Rudd, they know comedy and what is funny. In the case of Wanderlust, that equates to using physical humor (just about any scene with Lo Truglio’s nakedness), awkward humor (just wait until Rudd has a moment alone with himself and does that thing he does so well with making phrases ridiculously hilarious), characters who are not self-aware (Marino, who co-wrote the film with Wain, is such an excellent idiot you can’t wait for him to get his comeuppance) and subtle-yet-overt humor (Watkins excels in playing a stereotypically-rich housewife who is trying to suppress all her true emotions). The jokes are not easy (okay, some of them are a little juvenile in nature); Wanderlustjust has a bunch of funny people who know how to make it look easy.

Although Rudd is used to Wain’s antics (just IMDb his career and see how many projects they’ve worked on together), Theroux and Aniston (who are dating in case you’ve somehow missed every tabloid article in the last six months) show they can more than hang with the rest of the film’s usual funny suspects. Then again, considering Aniston’s Friends background and performance in Horrible Bosses coupled (no pun intended) with Theroux’ background as the scribe behind Tropic Thunder, that really shouldn’t be such a surprise. In short, this is just a talented cast doing their best to go for the joke. Fortunately, it pays off much more often than not when they do.

PARTING SHOT: A film that balances silly with intelligent humor enough to satisfy those who like highbrow and lowbrow humor alike, Wanderlustis far from being a classic comedy, but it is one that is entertaining enough to keep you from wondering why you ventured to see it in the first place.